Names from the Past - Who Were They?

Reviewing the history of Royal Mavis I was intrigued by this man, who had bid 460 guineas for Mavis at the King’s sale of animals from the Royal Herd in July 1923 There must have been serious competition from at least one other bidder to push the price to this level. There were a large number of breeders present but I suspect this may have come from Sir H Hambling, a very wealthy ex-banker, but Munro prevailed and Mavis was taken to join his Butley Herd based at Neutral Farm at Butley near Woodbridge in Suffolk. Although this was a high price for a cow, there were other sales in 1925 where the best cows were sold up to 400guineas.

I personally have some memories of Neutral Farm where, in the early 70’s, I remember seeing pigs there owned by Sir Peter Greenwell. This was a small farm on low land near to Butley Creek, a bit different from Sandringham. In 1924 – 25 Munro was only recording milk from 12 cows.

To return to Munro’s life, he was a successful Ipswich architect who designed various buildings in Ipswich and throughout East Anglia. He was noted for his Ecclesiastical work for the diocese of St. Edmunds. The son of a vicar, his childhood was spent at Westerfield, near Ipswich, where he stayed until he moved into a house that he had designed in Constitution Hill, Ipswich, an up-market district in 1911. It is difficult to know how he became interested in Red Polls, but he did become a Council Member and a Judge. From the old herd books his Butley Herd was recorded from 1919-26.There was a sale in July 1926 and 23 of his animals including Royal Mavis were sold at this sale. He showed animals in these years and in fact took Mavis to the Royal in 1924 winning the Championship.

For some reason, there was a reduction sale in July 1926, Royal Mavis was sold to Sir Herbert Hambling of Yoxford for 300 guineas, quite a loss from her initial purchase price. Putting this money into today’s values is difficult, but at four or five times the price paid for an average cow it would put her between £4-5000.

Munro was a man of many other interests. He was the driving force behind the creation of Ipswich Golf Course at Purdis Heath and he designed the Club House. Recalled by the Head Greenkeeper as the man who got things done, he planned for the idea of a new nine hole course and in fact bought 11 acres of land and gifted it to the club for this purpose. Regarded as something of an eccentric he was fond of dividing people into two types, those who agreed with him and damn fools!

He also pioneered colour Cinematography in East Anglia, was a Rolls Royce owner, a former amateur boxing champion, an early member of the soil association, and a water diviner of repute, apart from also being a considerable golfer, Captain for two years, 1928-29 (this coincides with him selling his Red Polls).

Munro aimed high in all his aspirations, going for the best in whatever field he was involved in. He wrote extensively and published books on Suffolk and Norfolk churches in 1937. This work would have dominated his later years. He died in Ipswich aged 83 and is buried at Westerfield where he’d been brought up, his father having been Rector at the time.

I must give many thanks to Joy Broughton for providing information from the old Herd Books and helping with the history. 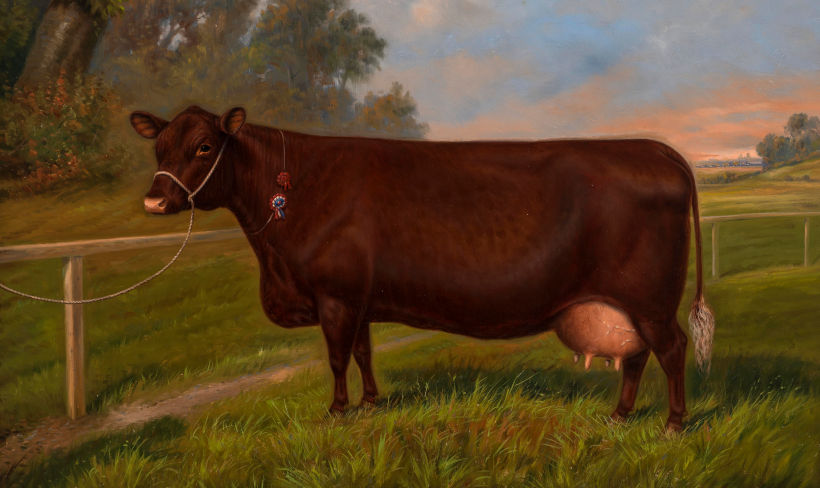