The Red Poll World Conference 2011 has just taken place in the UK, with people travelling from around the world to be part of a 19 day tour learning all about this rare breed of cattle.

The international group of delegates, who came from as far as Jamaica, Uruguay, New Zealand, South Africa and USA, travelled to numerous farms around the UK to view the Red Poll cattle and learn about what is involved in their conservation.

As part of the excursion, the group visited the home of John and Jayne Pochin, at Barkby Hall in Leicestershire, to view the Pochin Estates' herd of Red Polls' and hear how the herd has been built up in a relatively short period of time.

The herd was created by Mr. Pochin, whose great enthusiasm for conservation saw him set up a herd of Red Polls' in the summer of 2003 with the aim of preserving this old native breed for future generations to enjoy.

The herd initially started with the purchase of 14 in-calf heifers followed by a further 15 in 2004. With the help and advice of the Red Poll Cattle Society, estate managers Fisher German and in particular Andrew Kirk, the herd has grown to a 109 strong suckler herd. Andrew Kirk and family currently carry out the day to day management of the herd and have been farming on the Barkby Estate for four generations.

John Pochin comments "The retention and conservation of rare breeds is extremely important in the farming industry. We are immensely proud of what we have achieved here and very pleased that we can be part of the Red Poll conference and world tour.

"All of our delegates have their own herds of Red Polls' in their respective countries, and the general consensus was that they were extremely pleased with what they saw on the day."

The Red Poll Cattle Society is a charity which helps maintain the beef and milking qualities of the cattle as well as creating awareness and promoting the breed. Her Majesty the Queen is the patron of the charity, and in 2007 to mark her 80th birthday, John Pochin provided one of two Red Poll heifers as a gift. 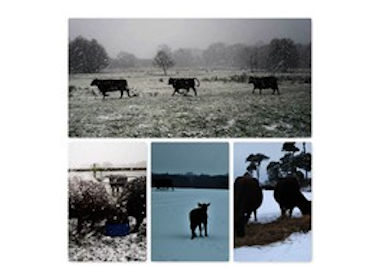